On Monday, some time observing colour ring markers in the satellite colony paid off and two Little Terns with green rings (indicative of birds hatched and ringed in Kilcoole) were recorded. The rings' codes read "IEV" and "IHZ" so we have named the birds wearing them; Evan and Hazel. These two have been displaying mating rituals together and we are sure they are about to nest, so I will keep you informed of their progress as the season goes on! Also, later on, when we have trawled through ring records I will be able to elaborate on the history of these two birds and hopefully we might get information from re-sightings made across their migratory flyway between the Irish Sea and western Africa where they spend the winter.

On Tuesday around midday, a walking group from Bray paid a visit to the site on their way to Birdwatch Ireland's East Coast Nature Reserve in Newcastle. They were keen to learn about the project so we had a good chat about the history, facts and current success of the project and then answered some questions about Little Tern conservation. As the group set off on their departure, one of the walkers, quite keenly, spotted a Ringed Plover chick on the footpath. The one day old chick, had haphazardly wandered away from it's parents in the wrong direction and found itself lost. No sooner than it was discovered, it was replaced within the protective boundary of the colony fence. We watched for a short period and tracked the arrival of an adult, which made it's way to the chick. There seemed to be a brief moment of bonding between the adult bird and the chick, until, thirty seconds later another adult Ringed Plover burst onto the scene and aggressively deterred the pretender. The chick now seemed familiar with the presence of the new bird and scurried underneath it's body. As we watched on we were satisfied that parent and chick had been reunited - but I pondered for a while about the other adult bird, the would have been surrogate, perhaps she had lost a chick too!


Wednesday began with the welcome arrival of a small flock of migrating Knot to the colony, although they were certainly unwelcome to the Little Terns on sentry duty over their valuable nests, which quickly formed a guard and ushered the visiting flock away. There's no tolerance for occupying Tern territory here!

A new burrow had appeared at the north lagoon a number of days ago and due to it's size, suspicions were building that it may be the work of a small mustelid, namely American Mink! Today those suspicions were confirmed as we watched helplessly as the Mink swam sleekly up the south lagoon, raising much alarm amongst the avian community as it passed by. It then made land and casually sauntered up the shore, disappearing into long grass on the railway sidings only 30 metres from our campsite and no less than 50 metres from the Little Tern colony.

The American Mink is a formidable creature; intelligent and tough, resilient and versatile. It is it's tantalising prowess which has led the American Mink to become one of Ireland's most distained invasive species. It's habit of 'surplus killing' when presented with a bountiful resource of prey makes the species a potent threat to vulnerable ground nesting bird populations, such as our Little Terns. There is no option but to trap it and remove it humanely from the site before it has an opportunity to do any harm!

Posted by Kilcoole Little Tern at 22:06 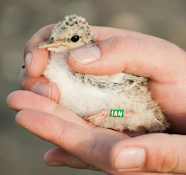